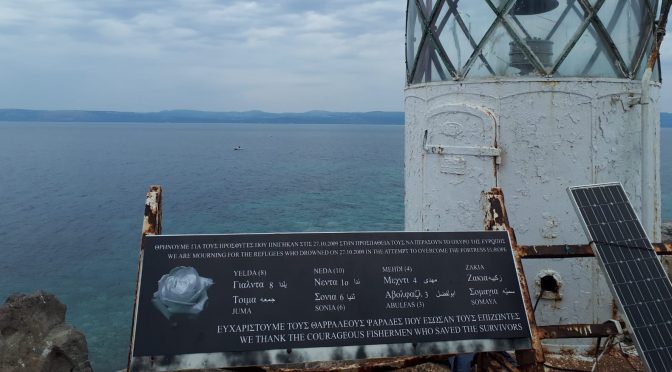 While we are down in Korakas we receive the news about a 5-year-old afghan boy, who just died being run-over by a truck in front of Moria, when he played inside a cardboard. Only a few days after authorities have shut down the kindergarden of “teamhumanity” were hundreds of children had played safely before.

Later on when we speak about our impressions of the day, Ehab remembers his own trip when he went to the island of Samos:

When we entered the boat, we thought we are all alone and no one thinks of us. Nobody knows that we face the danger of death. I realised in this moment when we stand all together there in Korakas in all our sadness that this was not true. There are people who care. This is maybe the moment in which you feel that there is humanity. We have never been alone.

When I went down to the shore, I started to pick up the leftovers of those who arrived recently. I found an asylum seekers card of a child in Turkey. And when I picked it from the ground I had the feeling as if I would destroy somehow a museum. As if it has to stay there because it belongs to a documentation of what was and the next person should find it there to understand. In this place down there, immediately you can feel the people, it seems you can see them in front of you and hear them how they talk. You can feel the continuity of all this and that people will continue to be on the move. You can feel them all as if they are with you. These memorials are a very strong part of this struggle not to forget.