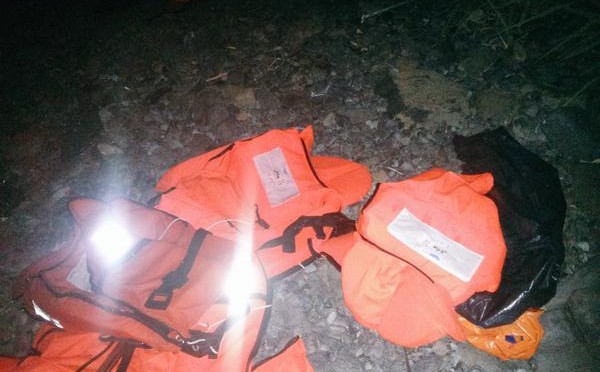 Wow i don’t know how to explain about that night?
It was a Great memory for the night that I got to know new comers refugees in mytilini!
It was great for me because I was waiting and looking for the refugees boats already 3 nights .
It was 3:40 am in the morning that I heard some engine sound from the sea.
I saw a boat and it was coming to the beach.
I listen to their language and realized they were talking in Arabic .
I became sure that they are new refugees and I turned on my light and ran down the hill towards them.
Unfortunately they were scared of me and they turned back towards the sea .
I shouted in Arabic that I’m your friend and want help you,
And in that moment a friend of the camp came and shouted towards the refugees: “assalamualeikum! Assalamualeikum!” Then they finally decided to come to us.
I was helping them with my other friends out of the water. We gave them table water to drink and started to help .
There were 40/48 people in the boat
All of my friends helped and informed to the the other people at our place. We carried the children, women and old people to the registration center by the car .
I had 2 different feelings that time.
First: I was so happy to get to know the new refugees whom I waited for and I could help them and they become happy and thanked us a lot😝😝😝😝😝
Second: it was sad that the people have to leave their country and want to save their life because of the war😭😭😭😭

A small Afghan boy is sitting outside a blue tent built up just behind the kiosk in the port of Mytilene. On the other side of the tent there are some other Afghan minors sitting on a blanket on the floor and leaning at the walls of an abandoned swimming hall. It is late in the night. His elder brother has fever. He is climbing out of the tent to join us. The two underage boys from Afghanistan are camping there already since four nights. They arrived to Lesvos together with their mother and father and two little sisters. In Moria they registered themselves as adults, as other people advised them to avoid reporting their real ages for the own good. Then the two of them got released alone.

“We fear to loose track of our family if we move away from here,” F. the elder brother says. “My father said we should wait here for them.” He seems exhausted and under pressure carrying all the responsibility of holding his family together on his small shoulders. With an official note ordering them to leave the country within 30 days, both boys’ time is running out, while they wait for their relatives. “My father said they would be released today. Again they didn’t let them go. Others were only one night in there. I don’t understand why they don’t let them free.”

END_OF_DOCUMENT_TOKEN_TO_BE_REPLACED


The twelve Syrian refugees that survived the distress at sea on September 15th near Lesvos left the island yesterday with a smile on their lips and a tear in their eyes. Finally free to go, they had to leave back two of their group who were arrested following a change of nationalities due to Frontex screening despite the fact that all of them were severely traumatised. The two arrested were brought to the local police station. One of them had only survived due to the help of two others of his group who hold him 9 hours over the water level as he didn’t know how to swim.

Sunday 15.9.13: A small dinghy trying to reach Greece from the Turkish shore and carrying 12 refugees from Syria got in distress at sea in the night of the 14th September around 23:30 after it hit on some rocks and water got into the boat.


The twelve refugees fell into the sea. The current separated them. Some of the refugees didn’t know how to swim. They only survived with the help of the other Syrians until the Russian cargo ship Yalker and a fisherboat saved them at 8:30 of the other morning near the bay of Gera/ Mytilene. At 10:30 the Greek coast guard brought them to Mytilene. Two Syrians had to be transferred to the hospital. All of them were exhausted, some had bruises from the sea. After registration by the coast guard they were transferred to PIKPA. Today they are going to be handed their papers and left to go to Athens.

Account of one of the survivors a few hours later in PIKPA/ Mytilene:

“It was 11:30 o’clock at night when we passed the sea broder to Greece, just half an hour after we had left Dikeli in Turkey. We hit a rock and our dinghy started taking on water. We desperately tried to empty it but suddenly it broke and started sinking. We fell into the sea. Some of us could not swim. Everybody was screaming and crying.I was holding on a piece of wood. We stayed nine hours in the sea. I got so tired that i fell asleep in the sea on my back. Maybe I was unconscious. Then I heard someone screaming.

A cargo boat by the name YALKER arrived. It saved me. Some other got saved by a fisher boat. The people on bord of the Yalker gave us their clothes, coffee, something to eat. I heard others crying and I cried a lot too because I thought my friend had died. Later I saw he had survived too. Two other Syrians saved him holding his body for all the time over the water. We all survived.”

In an e-mail the surviving Syrian refugees thanked the Yalker crew. The Yalker replied:

“We are very happy we could rescue the people! The watch officer noticed the people in the sea through the binocular and immediately informed the captain. We started the rescue operation after one minute. We practice every week rescue measures. It is a serious matter. In the world human life counts first!”


See more about the accident in the local news:
lesvos news (in greek)


Despite the positive experience of PIKPA open welcome centre that was opened by the end of last year by the local activist network “Village of all together”, which provided for the first time a real reception solution for refugees, the authorities on Lesvos keep refugees locked up in degrading and inhuman conditions ignoring the given alternative.

With the increase in arrivals in the beginning of May 2013, detention facilities started to get overcrowded once more on the island. The authorities didn’t know where to put the refugees anymore.

Some of the recent arriving refugees are trying to survive since three days in the sun while being “locked up” in the port of Lesvos without any protection or infrastructure. There is no food supply by the responsible authorities but only through volunteer citizens on the island. Nevertheless it remains insufficient. Yesterday one young man fainted due to heat, thirst and hunger.

Among the refugees of the last three days, who come in their majority from war torn areas such as Afghanistan, Syria and Somalia, are several pregnant women, elderly and sick persons, small children and even a five-mmonth-old baby with severe health issues. Basic medical aid is provided by the Doctors of the World. The coast guard and the police keep even vulnerable persons such as families, children, pregnant women for days imprisoned. Additionally Syrian nationals who according to a decision of the Ministry of Citizen Protection are not to be imprisoned anymore remain at least some days behind the bars.

On Lesvos since two months the coast guard arrests the refugees on land and on sea, detains them for a few days in the fenced open area inside the port, makes a first registration and then transfers them either to the local police station or to a detention camp in Chios or elsewhere in Greece. The police then issues after an uncertain period of time between some hours and up to months a detention and a deportation decision against each refugee.


Not knowing where to put the refugees other than inside the fenced port area or in the filthy cells of the police station, the arriving refugees are pushed around from one detention place to the other, from one island to the other or even to the mainland. Currently the detention centre of Chios where many of the in Lesvos arrested had been transferred to has also passed its capacity (of 100). No one can tell who will stay for how much time in detention. At the same time there are unaccompanied minors imprisoned in different police stations of the island who will soon reach one month behind the bars because they wait for a place in a specialised reception centre. Such a place exists in Agiasos, a mountain village on the island, but instead of offering refuge to the children in prison, the government has cut the funding, the centre is since two months without staff and the 60 hosted minors are trying to survive now without any food.

Meanwhile BBC published yesterday an article according to which the Greek authorities push-back illegally refugees and migrants to the Turkish side in Evros but also seemingly in the Aegean denying them thereby the right to access to the territory
and as such to asylum in Europe. Even more, the alleged push-backs put the lives of the refugees in risk of death.

Yesterday while the coast guard was repairing a rubber boat just next to the refugees who were sitting in the sun some boys from Afghanistan asked with fear in their eyes:

“They are not going to return us back with that boat to Turkey, are they?”

Despite the great efforts of the local activists in welcoming the new arriving refugees with all possible means in PIKPA and outside of it, the government obviously has not the intention to invest in this project and to create hospital and open welcoming centres. On the contrary it is creating a constantly growing detention and deportation regime with new and bigger prisons, growing repression, higher fences and hidden deportations on the border.


P.S. A remark towards the Frontex boat and staff that is currently in operation on Lesvos: How exactly is Frontex with its fundamental rights approach reacting to the obvious degrading detention conditions and the alleged push-backs? As proudly presented the high technology and expertise assumingly allows the “experts” from the European Agency to see everything that is going on on the border. Doesn’t it? IF not actively part of the system isn’t there at least a responsibility of cognisance and thus a complicity?