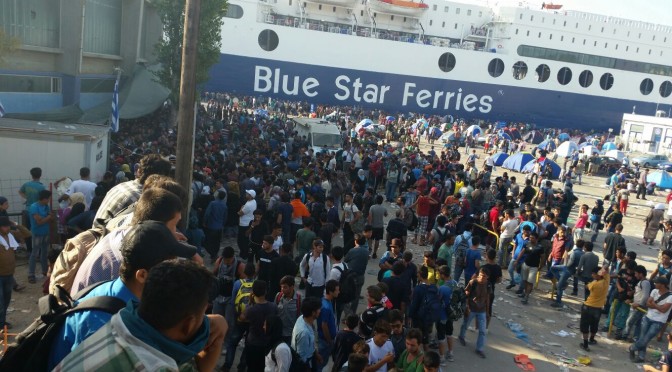 Police Violence in the Port of Mytilini from w2eu Lesvos on Vimeo.

Around 20 000 Refugees are currently stuck on the Island of Lesvos.
Since one week, registration for new arriving refugees in Lesvos has become an obstacle to continue the procedures and leave the Island. Since Friday the situation in the Port of Mytilini has escalated.
Hundreds if not thousands of refugees from Syria, Iraq and Afghanistan are caught in limbo. Every day they try to fight for a registration number in the port. Most of them try up to 10 days to get a registration number with no success, they are forced to camp around the port, the city or sleep rough. Their money has finished and they suffer from hunger and thirst. Desperate, if not in rage due to lacking infrastructures and the absence of any system, they break out in daily protest and not seldom fights. The state shows its presence in form of riot police, beating down men, women and children alike.

On Friday 4th of September hundreds of refugees tried to storm a ferry. The police threw tear gas.
In the following they banished all refugees from the port.
Newspaper Article about police violence in the port.
On Saturday 5th of September the refugees self-organized a queue for the Registration – Numbers. While th refugees where peacefully waiting in their queue, the police beat them with batons.
In the late evening some young Syrians started a protest in the port shouting

we want to go

The police violently ended the small protest. One Syrian got beaten until was unconscious.

On Sunday morning a group of Iraqis left the registration queue shouting they wanna leave. A group of afghans followed them and together they started a demonstration.
When they wanted to leave the port the police stopped them with batons. They hunted the refugees some meters and then attacked them.
An afghan family with a 2 year old and a 6 year old happened to sit just where the police was beating. They screamed in fear and pain. The father threw his body over his children who were crying loudly.
After some minutes the police stopped. The children sat between their parents still crying. The mother was bleeding from her mouth and her shoulder pained from the kicks on her body. A police officer pulled her by force up, shouting rudely “You are fine! You are fine!”. Another one pulled up the father, shouting “Its your own fault!”

A third police pulled another afghan with handcuffs and pressed his face with his knee in the cement floor. The man was then left unconscious on the street until UNHCR representatives arrived and called an ambulance. The man was carried away and UNHCR left again.
People got scattered in the port. The injured family stayed without any further support. The little girl was shivering for more than an hour after the attack.

What was left behind once again were thousands of refugees without any information on how they could get registered.

I prefer the rockets and bombs in Syria.there at least i have a home to sleep

A young economist from Syria told us.
The afghan families with newborns and grannies sleeping on cardboards nearby on Tsamakia hill just asked for one thing:

help us register and leave from here!!