Nasimgul spent 18 hours in the rough sea near Lesvos without knowing if she’d survive and having lost track of her small baby girl in August 2014. This is her story. 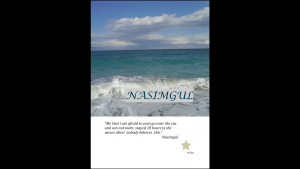 On the early noon of Sunday 11th of July a refugee boat got in distress 10nm North East of Karlovasi, Samos. The refugee boat carrying approximately 35-40 people was a sailing boat according to the testimonies of the survivors.
The causes of the shipwreck are not yet clear. The media speak about bad weather conditions, overloaded boat, panic, sudden movement of the passengers etc as possible causes.

On Sunday there are 15 survivors in the Greek side (9 were brought to Chios, 6 to Samos) and 8 survivors on the Turkish side (2 near the shipreck area and 6 norhernof this area). In Samos Hospital (ICU) there is a minor in intensive care. They were trying to transfer him to Mytilini ICU but his severe health condition made the transfer impossible.

At least 8 persons are still missing.

The rescue operation was carried out with 4 Greek coast guard boats, 1 helicopter and 5 boats that were sailing in the area that day.

Until now there was no information about the nationalities of the survivors or their health condition.