On Tuesday evening we met some social workers, lawyers, teachers and other people who work with minor refugees on the island. We started with an overview about the system in Germany: what happens when the unaccompanied minors arrive in Germany, the situation of the housing, the guardianships and the school system. 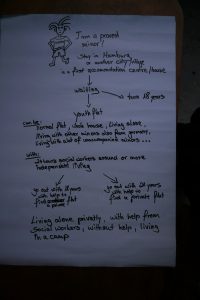 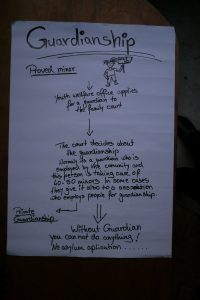 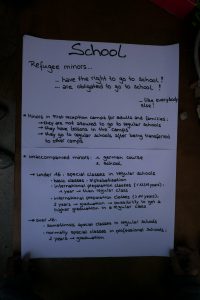 The people were very interested, had a lot of questions and we started the discussion. They told us about the problems in Greece and we exchanged about the different possibilities and difficulties in both countries. The situation in Greece, especially on the islands, changed a lot because many people arrived here and cannot move on. But when they left their countries they wanted to live in better conditions, planned to go to other countries for example to join their families and it’s hard for them to see that’s impossible to move on now.

The first reception for the unaccompanied minors is in the prison in Moria. They are only allowed to leave the prison a few hours per week. They have to stay there until a place in a youth shelter is found. But the problem is that there are not enough places for all of them so they are imprisoned often for months.

Also the school situation is very complicated. Most of the minors don’t go to school. In some cases where they tried to send children to school there were also protests from some local parents against it.

The guardianships for all the minors on the island are in the hand of three judges/ prosecutors. The minors never see their guardians and the social workers need to invest a lot of time to get signatures for sport activities, medical treatments and so on. They don’t get a general authorisation which would make the daily work a lot easier.

Naturally we also talked about family reunification and exchanged about the experiences.

Because to the lack of information a lot of people in Germany are afraid of bad consequences in their asylum procedure if they do family reunification. The communication with the lawyers, social workers and family members in Germany is also often complicated.

We all could profit a lot from this meeting. We are planning to keep in contact with the common wish to support the minors in their arrival in Europe.