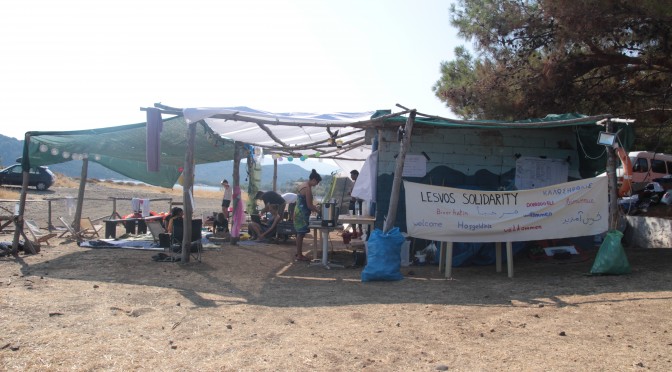 The first groups of w2e and JoG arrived in Mytilini (Lesvos) / Greece. The people from Greece, Sweden, Germany and France arrived on different ways. Some of them flew to Athens or directly to Mytilini, others travelled by car and ferry. Some of them already met in Athens where they organized the infoguides in different languages. When the ferry arrived in Mytilini some of the people had to stay in the harbour because the cars were full of material. So they got some first impressions of the situation there. The others on their way to the camp already saw the first refugees who had just arrived.

They were on their way to the harbour where the first registration takes place. Our people went fast to the camp to unload the cars, then they drove back to catch up the refugees because the way from where they arrive to the harbour is very long and the heat makes it very hard to get there. Back in the harbour, they caught up the rest of our group to go back to the camp where the work started. The camping place was really dirty, full of garbage and a lot of things were broken, so everything had to be renovated and cleaned. Also the tents had to be build up. But it wasn’t possible to arrive slowly and relaxed because during the construction of the camp every night more and more refugees arrived on the island. So with the start of the camp the action began immediately.