Since last August 1,200 refugees have been arrested in Lesvos for illegal entry into Greece. This was brought about by the draconian measures on the border between Evros – Northern Greece and Turkey. In the name of ‘Fortress Europe’, refugees, mainly from Afghanistan and Syria, were forced to turn back and ultimately choose a more hazardous entry into Greece by sea.
On the 14th December 2012, 29 refugees didn’t reach their destination. According to the testimony of the only survivor, the boat in which they were travelling suddenly turned upside down. 21 corpses were recovered over the next 2 days while the rest, including children, are still unaccounted for.

Protocol of the Ministry of Public Order and Citizen Protection

The procedure for processing all the papers for the illegal immigrants who wish to leave Greece is tortuously slow. The local authorities and the police, following orders from above, detain the refugees in prison for many days in cramped and over-crowded cells – a cosmetic policy to keep the Athens streets ‘clean’! In Nov 2012 the first hunger strike began in protest against the inhumane conditions. 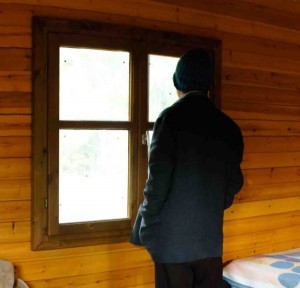 The next batch of refugees is waiting in the port, the park or in the streets of Mytiline. They are waiting for the police or the coastguards to arrest them but they don’t. The police prefer not to arrest them and then process the necessary papers in order for them to travel to Athens. This is the procedure now. The refugees surrender themselves but in vain. The authorities turn them away.

‘The Village of Togetherness’

When the author, Socrates Majouranis, was writing the book ‘The Village of Togetherness’ he surely couldn’t have imagined that his fairy story for children would turn out to be a shining and extraordinary example of solidarity between 27 volunteer organisations.
Yorgos Papaporfiriou is the president of the movement ‘Coexistence and Communication in the Aegean’. He says: ‘In the beginning we created the network to support Mytilinean citizens who found themselves in a difficult situation. When we saw pregnant refugees in the streets we went to the municipality and asked for the keys to Pikpa, a summer camp built some years ago for young people, which has been deserted for 2 years. Since 1st December we have supplied a place to stay and 3 meals a day for those refugees not arrested by the police. Apart from the local people, the University of the Aegean has supplied 25 portions of food on a daily basis. Furthermore, Doctors without Borders are on site to provide medical assistance and give out medicine between 3 and 5 in the afternoon.’
The situation worsens every day as the number of refugees increases without any help from the state machinery. For 4 weeks volunteers supplied food, hospitality, nursing while the authorities, particularly the police, took a back seat and shirked their responsibility. The authorities continually prevented progress.
Yorgos Papaporfiriou: ‘We in the ‘Village’ stand by our fellow beings in harmony, unison and solidarity and we are not going to stop doing this despite opposition from the state. If one doesn’t take action to protect our efforts then out operation is in jeopardy. We volunteers say this categorically to the authorities.’

Anthi Karangelli is one of the most active members of the ‘Village’. While we were talking she was counting how many spaces there were in order to accommodate the new family who had recently arrived. We are not wasting time while we are talking. We pass by the huts, by a group of refugees who had lit a fire and who were listening to songs with familiar melodies but unknown words. After that we went to the kitchen and the surgery and many refugees wanted to ask her things. 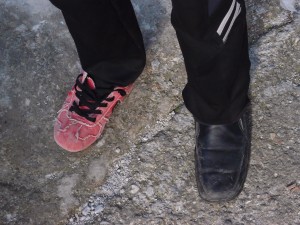 Anthi said: ‘The Mytilinian people have left us speechless. The response has been way beyond any expectation. There are local people in difficulties themselves who come and ask for pasta to take to their homes to cook it. They then return with cooked pasta for the refugees.’
Anthi is upset because in a few days she has to go to a Greek mission in Gaza. ‘Why are you doing all this? How can you?’ I asked. At the same moment I feel embarrassed. Not for the cliché but for lack of courage. But if anyone comes into the village these words are unnecessary. You are not going to see anyone boast or preach about what they are doing.
Anthi: ‘I don’t do it as an obligation but because I like it. I cannot ignore the way the refugees look at me. Nor the reasons they have left their home. When there is a war people don’t look for a quality of life but a way to survive.’
Doctors without Borders
‘For 5 years now I have been on a mission. By coincidence my first mission was here when Pagani was opened,’ said Christos Yeorgiathis, head of Doctors without Borders, who has been in Mytiline for 6 weeks. ‘The hell of Pagani, which was closed by international pressure, local demonstrations and many days of hunger strikes by the refugees, bears no comparison to what is happening in Pikpa. Pagani was a detention centre while Pikpa is something else. Here the volunteers take care so that hundreds of people don’t stay in the streets. We don’t know how long we will stay here, it depends on the needs. But in any case we are not to be a substitute for the state. The solution must be arrived at from central gov’t..We just paper over the cracks. This is the nature of our organization.’

‘I still have the bruises.’

Riza is 27 years old. He stayed in the ‘Village of Togetherness’ for 3 days with his wife and 2 children – 4 and 6 years old. ‘We escaped from Afghanistan 4 months ago because the Taliban were hunting us. We are Hazara and they hate us. I don’t know if you know it because you are so far away. They threatened to kill my family. We went to Iran and then to Turkey. We stayed in jail, I think, in Turkey but we were not allowed to know where we were. I didn’t see my wife and children for a month. It is not allowed to be with a woman or your wife in prison. It was very bad but the worst of all was in Iran. There they beat us night and day. I still have bruises on my feet.’
Riza speaks English and he translates for the volunteers. While he was talking 5 more compatriots gathered around us. He explained to them what we were talking about and then they all revealed bruises on their feet.

Riza is translating and Mohammed is talking: ‘The Taliban burnt my home. We had to leave immediately. My child is 3 years old and you don’t know important it is to have doctors here. My father is in Norway. He is waiting for us to go. I don’t know what we are going to confront but there is hope. Go to the internet to see what the Taliban did to our home. We don’t want to harm anybody. The only thing we want is work and peace……and to be accepted, not to be deported.
We are not Immigrants. We are Refugees. 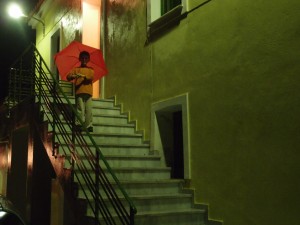 Riza wants to talk about his journey: ‘We found somebody in Turkey and we told him we wanted to leave to go to Europe. First we asked for asylum for many days. We explained we were refugees, not immigrants. I have no money. My uncle in Afghanistan sent some money to this Turk then they put us in a boat. We were 35 adults and 10 children. We sailed for 6 hours. It was night and cold. It was important not to be seen.’
Now he is smiling.
Riza: ‘Here ( in the village) it is like everyone loves you. They take care of us. We are examined by doctors. We hadn’t seen a doctor for months and our child was ill. And some other women from Afghanistan were pregnant. Only here were they examined. They are a priority. First the pregnant women, then the children and then us. Here everybody helps us. The only problem is that there is no hot water for a shower.’ And now he was asked what his plans were.

‘We are waiting. We will go where we are accepted. We don’t have a destination.’ Fellow of Archangels

One of the organisations who participate in ‘The Village of Togetherness’ is an organisation of 35 volunteers of the Church of Kayani (Lesvos).
Nikolas Mavrouthis, deacon of the church: ‘In May 2011 we began giving food to our fellow villagers, who needed it. Now we are buying food and cooking it and taking it to the camp. Fortunately the entire parish is on our side. We are not confronted by racism. All the people who come into our country are searching for a better future because they cannot have it in their homeland. Every Sunday after the service the fellowship gives Tupperware containers to the residents of Kayani. We give them empty containers and everybody puts in a portion of food. Later we collect the containers and take them to ‘The Village of Togetherness’. We always collect more than we expect. We also collect socks, clothes and blankets.’
‘The Village of Togetherness’
Last week there were 140 refugees, mostly from Afghanistan and some from Somalia and Syria. The number is not always the same, it depends on the arrivals and how the police manipulate the situation.
Maria: ‘The police come here and report to the media how many arrests are made. Everybody who witnesses this realizes the transparency of the police and state behavior. It was the first time I had seen adults and children so pleased to see policemen so that they could be arrested.’ 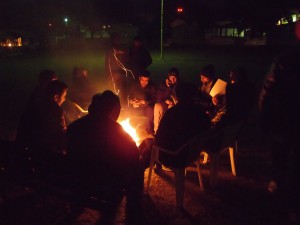 ‘It’s our turn to leave,’ claims Alize, a 30 year old man, who with his wife and 2 children pack their things and get ready to be arrested.
Today the municipal camp was emptied by the police because the refugees were given documents. But the camp stays open because of the volunteers who stay there in shifts. ‘As long as there people who suffer, there will be people to help them.’