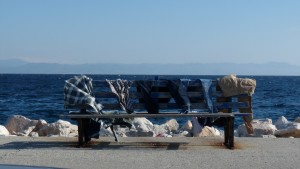 In the last weeks we have seen again refugees arriving on Mytilini who due to lacking infrastructures of reception on the island are piled up in miserable detention cells or if these were absolutely overcrowded they found provisory shelter in parks, squares and public places until the moment when the inhabitants of the island attempted to find another solution for them.

The transfer was a result of the pressure of the local society and the worsening weather conditions which followed and which could have had tragic consequences for the lives of the homeless refugees.

The Network of organisations and civilians “the village of all-together” and a great section of the local society took the responsibility and committed itself to support the functioning of this first open reception centre from the very moment of its birth.
The authorities from their side committed themselves to ease the functioning of the centre.
What did they really promise? Two things:

1. Firstly and mainly they committed themselves to convincing the Ministry of Citizen Protection and Public Order to proceed with fastened procedures in registering the refugees and giving them administrative deportation orders (so called «white paper») in order to relieve PIKPA but also the detention cells of the police that are completely unsuitable.
It was from the very first moment clear that without staff, funding and in view of the wave of arrivals on the island, PIKPA could only offer a short-term solution (2-3 days) of dignified reception.
2. The second commitment that was taken by the First Reception Service of the Ministry of Citizen Protection and Public Order, was to contribute to the catering and the provision of basic needs that from the first moment until now are provided by volunteer citizens of Mytilene, the Church and the University.
Where would the Ministry find the funding (that should reach us in material and not in monetary form)? From European funds which the Service has for exactly this scope and which it has not used until now.
The municipality of Lesvos and the Prefecture of the North Aegean recognized that what we are asking for is really needed, constituting prerequisites for the viability of the project and the non-exhaustion of local resources that are offered with so much generosity to the fellow people in times of crisis. They promised to do whatever was in their hands to help immediately.

Three weeks later refugees – including many small children and even newborns with urgent needs – continue arriving at PIKPA being in a very bad state suffering from the cold and rain.

Three weeks later volunteers continue offering exceeding their powers and not simply substituting the state but ultimately acting within a huge gap created by the state apparatus in this area, which threatens the refugees, the people who choose to stand beside them but also the whole of our society, thus contributing decisively to the development of fascist formations.

Three weeks later the police directory blocked by instructions from the Ministry throws the ball of the responsibility for the care of these people and their safe stay to us – even for an unspecified period of time. Desperate we rush to meet the growing needs while authorities continue to apply the same cumbersome bureaucratic practices.

Only that neither the refugees’ lives nor the efforts of our fellow citizens who have taken immediate action in this desperate situation which has been created by the deadheartedness of the state apparatus can be encountered with bureaucracy.

In this moment where the citizens are supporting an effective solution, the authorities have to finally respond openly. Will they support the effort or will they insist on an absurd, inadequate policy measure of a criminal indifference and on the continuance of the degrading and inhuman detention and misery of people who first of all require would protection.

We remind them: You don’t have the refugees in front of your eyes as they have been a few weeks ago when they were sleeping in front of the theatre of the municipality of the town. Now they are here with us and we demand you to respect our efforts, our investment of time, our offer but first of all our decision not to allow people arriving in our home to get into this misery, to be exposed to the racist violence and fascism that is threatening all of us. We have stood solidary to our fellow people and we will not stop doing everything that is in our hands.

If you don’t decide to take the needed measures in order to protect the – until now – successful effort of PIKPA, our effort will be in danger and its’ end might be inevitable.

We will not risk the lives of the refugees nor the effort of so many of our fellow citizens. We therefore want to clear towards all directions that we will leave PIKPA within ten days if our demands that we expressed from the very beginning for the continuance of our effort are not answered. We are drawn to this decision with a feeling of responsibility and respect towards the refugees who will have us by their sides in any way.

You will find yourselves again confronted with the old problem, again testing your humanity. In this case you should be ready to take on your responsibilities towards all of us but mainly to find solutions for this new humanitarian crisis that your deadheartedness will produce once more.

“The village of all-together”