Elias (name changed) is 20 years old. He is from Aleppo where he was also studying to become a mechanical engineer. His plan is to go to the UK. The way from Syria to the UK is hard, risky and expensive. He shared the dangers of the road with his sister and his cousins.

“My father told us: You must leave. Here you will be killed. He could not come with us. My parents and the rest of the family had to stay in Syria.”

Elias was forced to join the army, but he didn’t accept to kill his people.
For more than a month he was on the road to Lesvos.

“We were terrified. We didn’t know which way we will be send to Europe. The smuggler said we should not worry. The boat was big, we should be only 10 passengers and the journey over the sea would take only 30 minutes. When we arrived at the coast we saw the rubber boat. We were 42 persons traveling in the night. The waves were enormous. Then the engine had some problems. I thought we would die. I told my sister to close her eyes and we started to pray. If I knew how dangerous it was I would have never taken my sister with me. We arrived wet and scared to death on Lesvos. We went ourselves to the police but they sent us away telling us to come back the next day. When we were finally arrested we stayed three days in prison. 70 men in a cell for two. We were locked up together with penal detainees.”

Upon release the family stayed five days in PIKPA and then left.

“I would have never left Syria if there wasn’t war! Now my plan is to study and then return to my country and help to build it up.”

On Wednesday 6th of February the strike of the sea workers was forcibly stopped by the Greek authorities and the ferry traffic started again. That was when the recently in PIKPA hosted refugees could finally leave towards Athens.

The refugees upon being asked in a plenary session among solidarity people and refugees in PIKPA what was their most important wish had informed us that they wanted to leave as fast as possible from the island. Together we cleaned PIKPA and prepared it for the next newcomers. In the afternoon a municipality bus took them to the port and we were all there to say goodbye until they disappeared into the ship. We felt happy, that this part of their journey seemed successful for them. We promised each other to stay in contact and exchange our news also in future. Everybody in the port – including the coast guard – had to realize that these people are not alone and that we walk this road together in solidarity. 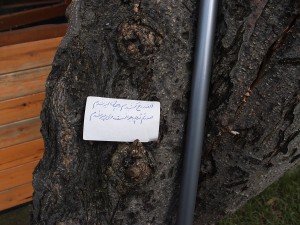 To the world:
I saw lots of sorrows,
that even the world is telling me: hey stop!
I am full enough
I can not see the sorrow in your face anymore.

My face might look younger,
but i am not young anymore.
I am old.

Found in PIKPA on a tree on Friday 21st of December 2012 when the last remaining refugees had been transferred to the police station.